Recently, Gourmet Live came up with a list of 50 Women Game-Changers in food. Mary from One Perfect Bite and a small group of food bloggers decided to celebrate these influential women in food by cooking a recipe from each of them over a 50 week period. Recently, I posted Martha Stewart’s (#4) Cold Sesame Noodle recipe; however, as I’ve been out of the town the past several weeks, I missed out on M.F.K. Fisher (#5) and Marcella Hazan (#6).

This week, the group is celebrating Madhur Jaffrey (#7), the noted author of 29 cookbooks to-date, including Indian, Asian and Vegetarian cuisines. Madhur Jaffrey is a seven-time James Beard Foundation Award winner and is best known for introducing the Western world to Indian cuisine.

One fact about Madhur Jaffrey that I was totally unaware of was that she was actually an actress who appeared in many films before she became known as a cookbook author. In fact, it was her award-winning performance in Shakespeare Wallah in the 1960’s that gave her the name as the “actress who could cook,” after which she was hired by the BBC to present a show on cooking. In 1966, she received a book contract that produced her first cookbook, An Invitation to Indian Cooking, after an article about her and her cooking appeared in the New York Times.

When I first started learning how to cook Indian cuisine, I borrowed several of Madhur Jaffrey’s cookbooks from the library, including Quick & Easy Indian Cooking and World Vegetarian. Over the past several years, cooking Indian food has turned from being totally intimidating to a much more approachable cuisine, thanks to Madhur Jaffrey and a few Indian cooking classes.

With a bounty of cucumbers in my last several CSA boxes and the sweltering heat this summer, I could think of no better way to celebrate Madhur Jaffrey as one of the top 50 Women Game-Changers than by making her Cold Cucumber Soup from At Home with Madhur Jaffrey.

Madhur Jaffrey brought this Cold Cucumber Soup recipe back with her from a trip to the Maldives, after tasting this soup at the Cocoa Island resort on the South Male Atoll, just southwest of India. She recalls “sitting in an airy pavilion, the calm blue sea on two sides of me, balmy breezes blowing past, sipping the soup a tablespoon at a time, and thinking, ‘This is what heaven must be like.'”

Although this soup appears simple, apparently the original recipe was quite complicated to make. In fact, Madhur Jaffrey spent two years simplifying this Cold Cucumber Soup recipe for the home cook, trying to retain its essence while cutting down on all the steps used at the restaurant. The chef who created this soup, Stana Johnson, combined South Indian seasonings and the notion of cucumber raita, an Indian yogurt relish, in this light cooling summer soup.

When I first read through this Cold Cucumber Soup recipe, I was intrigued by the idea of creating a soup base by toasting urad dal and spices, and then allowing this spice mix along with curry leaves to infuse the chicken broth. I have eaten dal as a dish, but not as a flavoring. Toasting the urad dal with mustard seeds adds an unexpected flavor dimension, and the chilies give this Cold Cucumber Soup a kick.

Today was 90 degrees out, so this Cold Cucumber Soup was perfect. In fact, I had it for lunch and dinner.

Adapted from At Home with Madhur Jaffrey. Toasting the urad dal with the mustard seeds and chilies adds a nice flavor dimension. Fresh curry leaves are well worth seeking out, and can be found at your local Indian grocery store. I used non-fat yogurt to keep this summer soup on the lighter side. You can substitute vegetable broth if you’d like.

Please stop by and take a look at what the rest of the group made this week in celebration of Madhur Jaffrey: 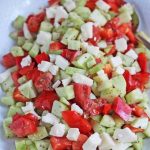 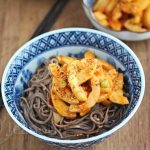 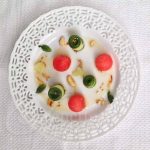 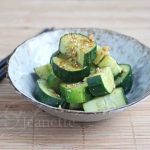 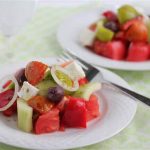 Preparing for Hurricane Irene – What I learned {Greek Salad with Tomato, Cucumber, Peppers and Feta Cheese}