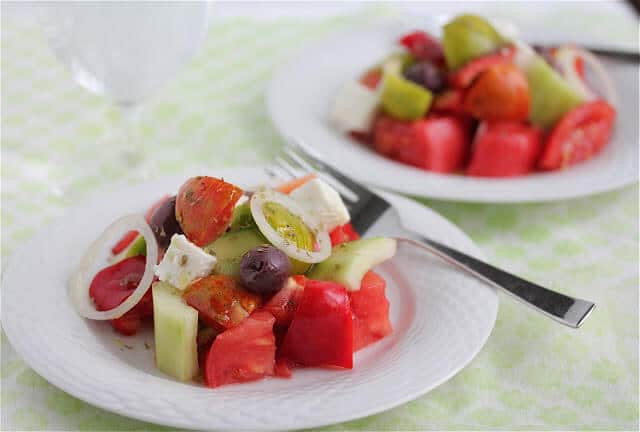 This past week after the earthquake on the East Coast, and in anticipation of Hurricane Irene, everyone was busy stocking up on food, gas and supplies, before hunkering down for the impending storm. As the countdown began before Irene would hit, things got a little crazy. People started getting antsy as supplies ran low. A policeman was stationed outside Costco’s, people started honking impatiently, and doing all sorts of crazy driving maneuvers (like backing out full speed onto a major road without looking!). Shelves ran bare – there were no flashlights, D batteries or water to be found, and gas stations started running out of fuel as the realization that people might be housebound for days set in.

Although stocking up on non-perishables (e.g., boxed or canned stocks and soups, nut butters, whole grain crackers, granola bars, dried beans, dried fruit, nuts, canned tuna and salmon, bottled water) is always advisable during emergency situations, stocking up on sturdy perishables (e.g., apples, melons, bananas, oranges, lemons, carrots, cabbage, onions, garlic) also makes sense.  With trees down and power outages, it is hard to tell how long you might be housebound, without running water and electricity. Although meat and dairy products obviously would not survive a power outage, fresh fruits and vegetables that are on the sturdier side are great choices. Not only can they be enjoyed whole, but a simple salad can be made too.

With this in mind, I made a stop at the farmer’s market the morning of Hurricane Irene, and bought lots of hardy apples, some peaches, plums, heirloom tomatoes, cucumbers, cabbage, and garlic. I also found some Gold Kiwis at the local Asian market, costing only 3 for a dollar, and grabbed a bunch. I made one final stop in town and found some bananas (they were sold out the night before), lemons and oranges.

After making all the preparations we could think of, our family hunkered down Friday night and spent some nice cozy family time together, watching a Harry Potter video, and sleeping side by side in the family room on the couch and the floor. Although waiting for Hurricane Irene to hit was a bit nerve wracking (there was a tornado warning in effect as well, and a town issued curfew, plus the constant news feed on the Weather Channel that my husband wanted to watch), our family spent some quality time together in close quarters.

We woke up Saturday morning to heavy winds and rain, and did what you’re not supposed to do in the middle of a hurricane — go outside. There was water gushing over two clogged gutters and we had to figure out a way to divert the water away from the house to prevent flooding in the basement. By 11:00AM, the eye of the hurricane was upon us, and it was eerily quiet and sunny out. Our oldest son called from college to see how we were (how sweet!). A few hours later, the storm was over, and we ventured down the street to see what damage might have occurred. 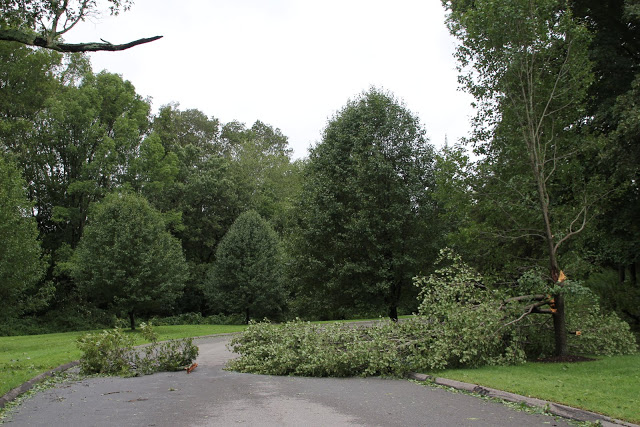 We were extremely fortunate not to have lost power, as we learned that almost 80% of our town is currently without power. We called and texted our neighbors and friends to see how they had fared. For those without power, we invited them over to take showers over the next week, hang out during the evenings after it gets dark, and share some meals together. Although the first day after a storm people usually just want to stay in their own home, by the second day, most people are ready for a hot shower and a home cooked meal in a lit house.

Last spring, we had a tropical storm and many of our friends had power outages for almost a week. We were one of the few families that did not lose power (thank you Lord!). My kids fondly remember the flurry of people coming in and out of our house, whether for a shower or a meal, as well as the extended sleepover we had with a family of six – it was like one giant playdate. It was so cute to see the 16 year olds playing basketball and video games with the 8 year olds. It was also a nice time to reconnect with friends. When power was restored, no one wanted to leave (well, the parents were ready, but the kids were not!).

Here are some ways to prepare for a natural disaster, most of which we did, and some that we did not, but will be sure to do next time:

What did you do to prepare? Please share any additional tips.

For dinner tonight, I made a version of Horiatiki Salata, a Greek Salad I enjoyed at a local restaurant a few nights before Hurricane Irene was set to arrive. The most important part of this salad is to make sure you use the ripest fresh tomatoes possible.  I had picked up some beautiful heirloom tomatoes and cucumbers from the farmer’s market Saturday morning before Hurricane Irene came, and still had a red pepper left from my CSA Box.

The boys commented on how fresh this salad tasted – I am just so thankful we made it through Hurricane Irene without any noticeable damage, and hope to be able to help some friends and neighbors out until their power is restored.

I used Greek Seasoning I found in a local Greek market – Penzey’s carries one too. If you don’t have any, dried oregano is just fine. The salad I had at the restaurant had anchovies. I didn’t have any so I left them out – the Kalamata olives provide the saltiness here. 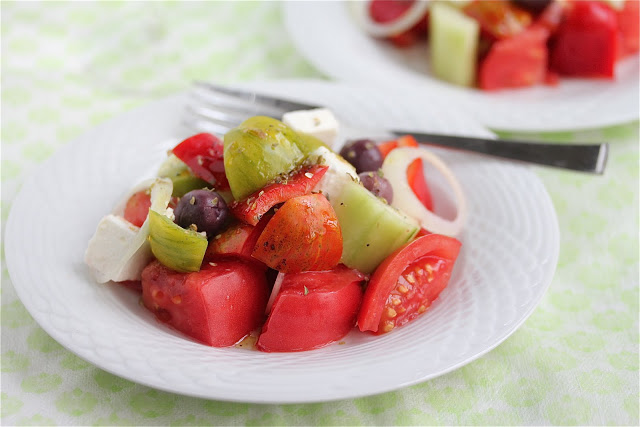 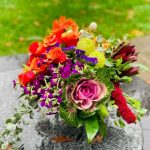 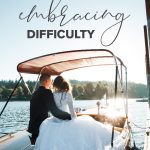 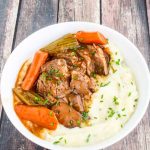 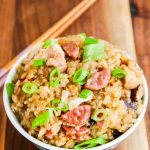