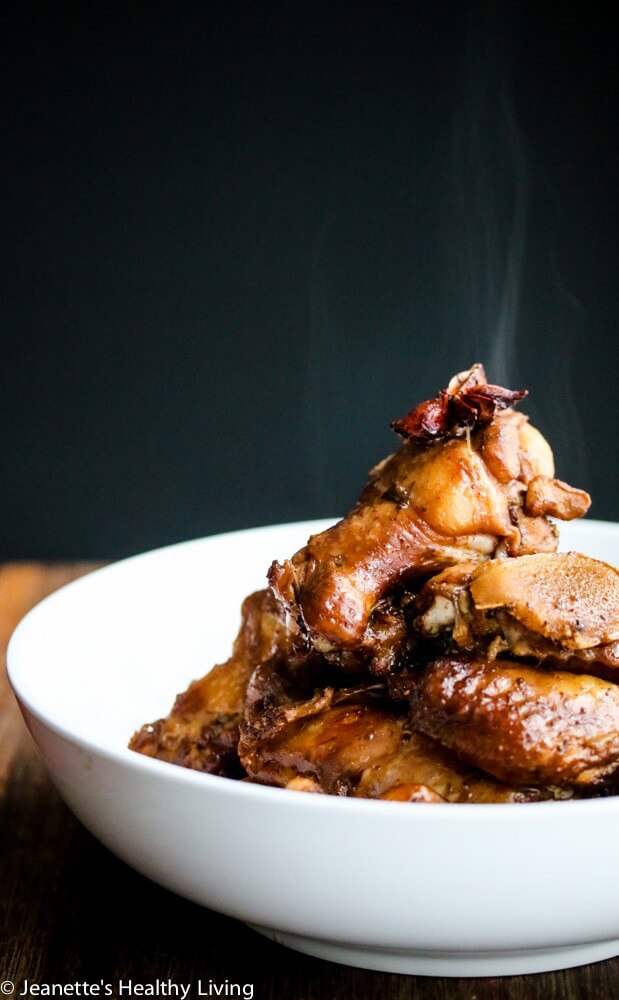 Did any of you watch the preview episodes of Fresh Off The Boat last week? This series is based off the life of Eddie Huang, a chef and food personality, who wrote Fresh Off The Boat: A Memoir. I’ve been waiting for the season to begin for a while, anxious to see if this comedy will help dispel some of the stereotypes of Chinese Americans. The first of the two preview episodes got 7.93 million viewers, becoming the second highest rated comedy premiere this season, and the second episode was watched by 7.56 million viewers. I was really surprised by these numbers.

As a first generation Chinese American, who is married to another first generation Chinese American, I’m just as American as many of my friends. I’ve never been to China, Hong Kong or Taiwan (the closest I’ve come is my trip to Singapore, Bali and Vietnam many years ago). My kids don’t speak a lick of Chinese (although two have tried to learn and given up for the time being, saying it’s too hard), and my youngest son says he doesn’t like Chinese food (I’m hoping he’ll grow to like it). Yet, because we look Chinese or Asian, people assume we were not born in America. Whenever I’m asked where I’m from and I say Maryland, they look at me strangely, and aren’t quite sure what to make of what I just told them. Don’t get me wrong, I’m proud of my Chinese heritage, but I never understood why an Italian American or Irish American was anymore American than me. 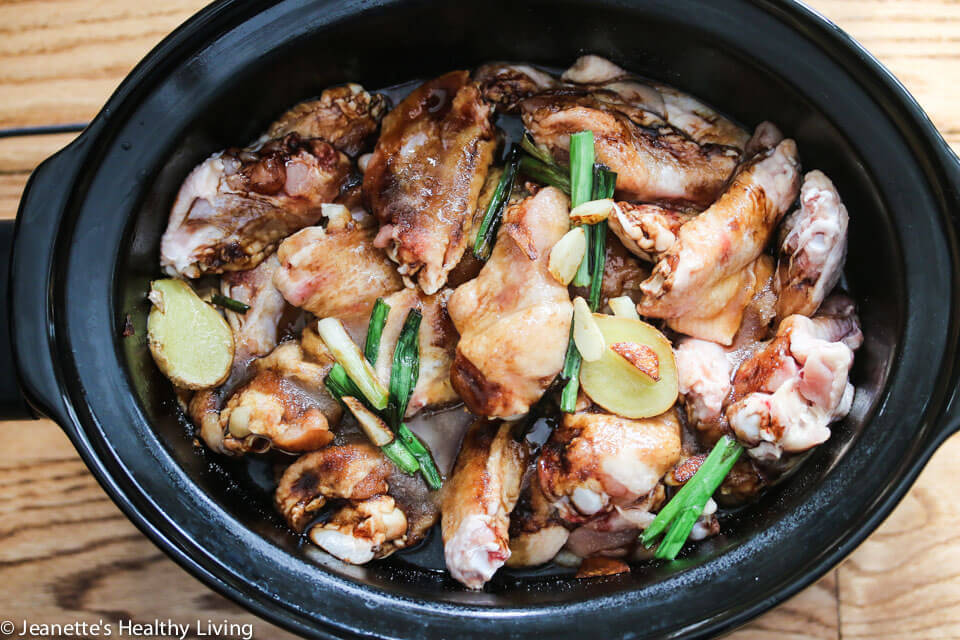 Just last week, my son’s coach asked him what he was studying in social studies, and when he said China, his coach said, “Well, that should be easy for you,” to which my son responded, “Not really” because sadly he doesn’t know anymore about China than he does about the rest of the world. Then, the coach followed up with, “Do your parents speak Chinese?” to which he answered, “Not really.”  My husband and I do speak some Chinese (thanks to Sunday Chinese school for me and summer Chinese lessons for my husband imposed by our Chinese immigrant parents), but I find it interesting that most people don’t ask Italian Americans if they speak Italian, or Swedish Americans if they speak Swedish. I’m sure his coach was even more confused when he asked my son what he was having for dinner and he told him “Calzone.”

My kids have grown up in a largely caucasian community, and have endured some teasing and ethnic jokes, albeit no where near as much as my generation. Sometimes I think my youngest son tries too hard to “fit in” and act like he’s not Asian. Perhaps that’s why this middle school-aged child refuses to eat any Asian food. Honestly, I haven’t done a very good job of carrying down many Chinese traditions. For Christmas Eve, our traditional dinner is Chinese Hot Pot, and when my kids were young, I’d make a special meal for Chinese New Year (with some “lucky” food), and give them red packets of money. My husband and I have tried to instill good values in our children, many of which are good old Chinese values – the importance of working hard, getting a good education and saving money. And, we’ve worked really hard to keep our family unit close. 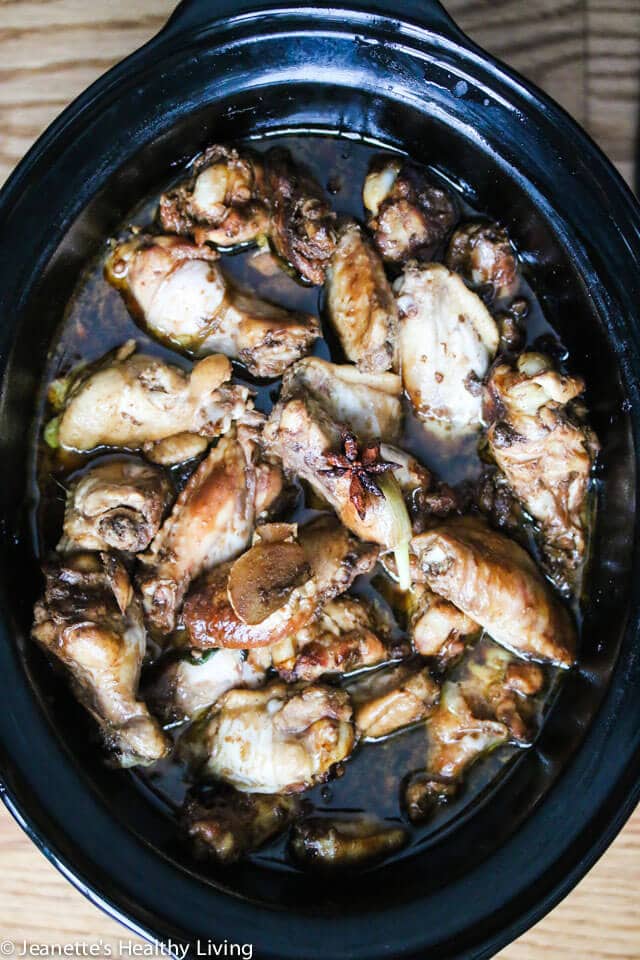 The most Chinese thing about me is probably the fact that I love eating and cooking authentic Chinese food. However, these authentic Chinese meals are usually reserved for our own family, our Asian American friends, and close friends. So, when I made these Slow Cooker Chinese Soy Sauce Chicken Wings for our Super Bowl party a few weeks ago, I have to admit I was a little nervous about serving authentic Chinese chicken wings to our guests, most of whom have never eaten authentic home cooked Chinese food.

I’m hoping Fresh Off The Boat helps illuminate the general public not only on what it’s like to be an immigrant family trying to assimilate into the American culture, but also the American born children of immigrants, and the next generations to come. I also hope “Americans” will become more curious about authentic Chinese cuisine and want to give it a try at home. 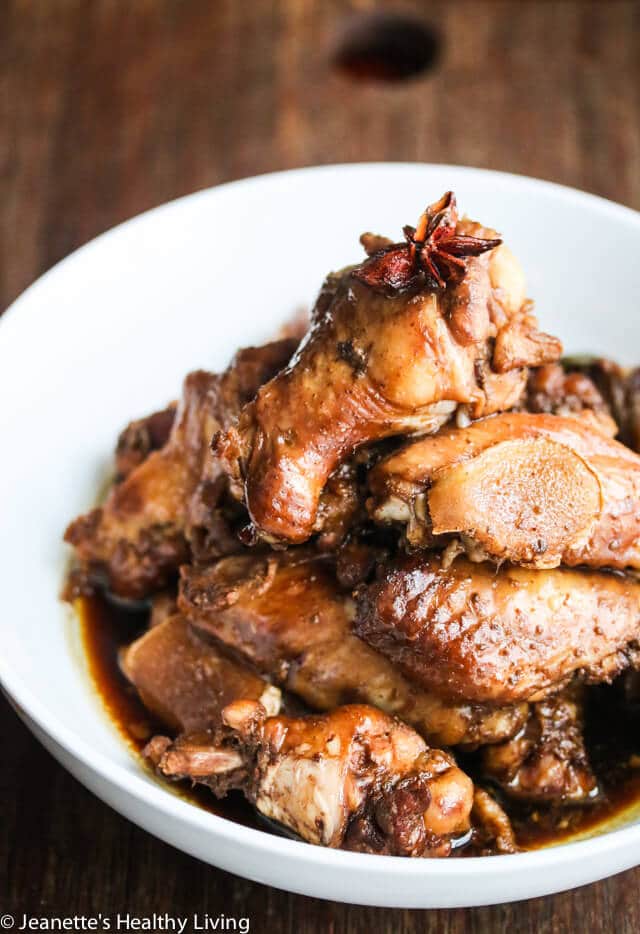 Now, let’s get onto these Chinese Soy Sauce Wings…ginger, garlic, scallions and star anise are the aromatic ingredients in this recipe, and a combination of dark and regular soy sauce are used to achieve both flavor and a beautiful color.

You can certainly use other parts of the chicken for this recipe – I just used wings because you have to have wings for Super Bowl. I suggest making this dish in advance and refrigerating it so you can scoop off any excess fat that floats up to the top of the sauce. The sauce is so flavorful and delicious over rice, grains or noodles.

Fresh Off The Boat is on Tuesdays at 8PM EST on ABC. Watch it and let me know what you think. I’d love to hear. 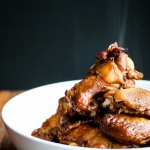 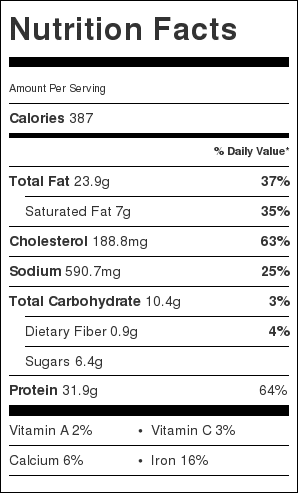