Has anyone noticed that the squirrels are looking mighty fat lately in the Northeast? I have a feeling they’re stocking up. So strange, but right after Hurricane Sandy hit, I saw a squirrel outside my window chewing on a plastic container. At first, I thought he must have been really hungry, and that he was trying to eat the plastic. But, after one of my boys did a little googling, he concluded that the squirrel was trying to sharpen his teeth. With all the strange weather patterns we’ve been experiencing, I have a feeling we’re in for a very cold, long winter. 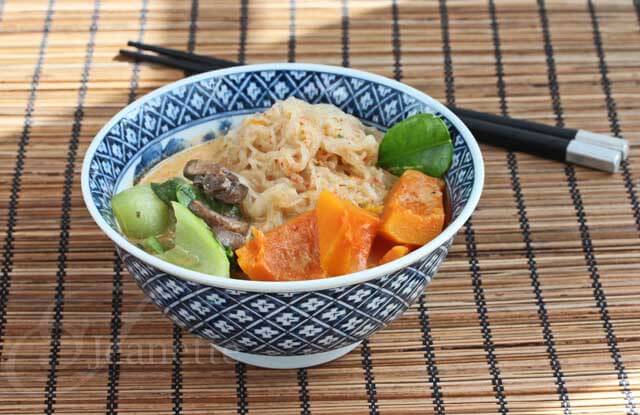 For those of you who’ve been following me for a while, you know that I love Thai flavors – lemongrass, kaffir lime leaves, coconut milk – in curries, stir-fries and soups. With the weather turning much colder lately, I especially love Asian noodle soups that have warm spices. Although I love hearty noodle soups, I do lighten up my noodle soups with shirataki noodles once in a while. Shirataki noodles have been enjoyed by the Japanese for many years, but have become all the rage recently now that they have been discovered to have almost no calories and are very low carb, so they’re diabetic friendly. They’re also gluten-free and vegan.

Made from the root of an Asian plant called konjac, shirataki noodles are translucent and remind me of mung bean noodles. They have some crunch to them, but are flavorless, so they absorb soup flavors nicely. Shirataki noodles should be rinsed before using to remove any bitterness. 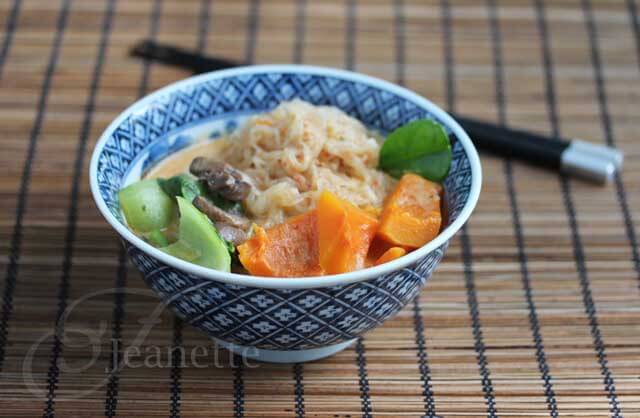 Today, I’m sharing a Spicy Thai Coconut Winter Squash Noodle Soup recipe for this week’s Food Network Fall Fest event where Winter Squash is being featured. Winter squash is a terrific way to add bulk and meaty texture to vegetarian meals, so be sure to give this recipe a try if you like Thai flavors but are looking for something on the lighter side.

Be sure to check out the following recipes from all my friends participating in this week’s Fall Fest!

This recipe is linked up to Beyond the Peel’s Keep It Real Thursdays.