Lyon-Style Chicken with Vinegar Sauce is a simple, healthy and delicious dinner.

Spring sports are in full swing in our household and things have gotten pretty crazy lately. Getting dinner on the table has been especially challenging as the sports activities end later and the kids want to eat as soon as they walk in the door. It wouldn’t be so difficult except for the fact that I am usually both the chauffeur and cook, so that makes it nearly impossible to have dinner ready unless I make something super quick and easy, or something in advance.

Lately, planning ahead has not been my forte. In fact, I feel as if I’m scrambling just to get to the next pickup, meeting, event, or meal. I do need to try to plan my meals for the week better. Otherwise, dinner will be a mad dash as it was this past week. One day this week, I left the house at 3PM to take one of my sons to track practice. By the time he was done with practice and we had picked up another one of my kids on the way home, it was already 6PM. My husband and third son came in the door a few minutes later. Of course, the first question was, “What’s for dinner?” and “When will dinner be ready?”

I had picked up some tilapia fish filet that was on sale earlier that day and decided to make some fish tacos for dinner. My kitchen turned into a whirlwind of activity as I chopped up tomatoes, avocado, scallions, cilantro and lettuce.  I also made a divine fish taco sauce that I posted on facebook. I seasoned the fish, threw it on the grill along with some corn tortillas, and dinner was on the table in 15 minutes. I managed to take a picture of one of the fish tacos with my husband’s iphone before feeding the masses. Everyone was starving so they wolfed down all that I had laid on the table before I knew it. I quickly chopped up some more toppings and dug out some leftover poached chicken which I seasoned and reheated. Before I knew it, that was gone too.

I posted a picture of the fish tacos on my facebook page while everyone was eating. A funny thing happened after dinner. One of my kids who “likes” my facebook page saw my wall post that said that these fish tacos were so good, I didn’t actually get to eat any.  All of a sudden, the kids realized that I hadn’t eaten anything while they were busy stuffing their mouths. That’s okay, I said, I had a veggie taco, with all the leftover toppings. Some things never change as a mother. When your kids are young, you eat off their plates. When they’re older, they eat more and you still get the leftovers…there’s just less leftovers (which is not such a bad thing!).

Today, I am sharing a recipe for Lyon-Style Chicken with Vinegar Sauce, which I made a few days after these fabulous fish tacos were devoured. This time, I made enough so I could have some ;). Thanks to my sweet husband who helped do all the chauffeuring that evening, I had the luxury of making a “real” dinner. By “real,” I mean I had time to make a nice quinoa pilaf and Swiss chard dish instead of steamed rice and salad.

I was a bit afraid the vinegar would be too overpowering in this dish since the other ingredients in the recipe were simply garlic, a bay leaf, chicken broth, butter, salt and pepper. The recipe also called for creme fraiche, which is similar to sour cream, but thicker and less sour. To reduce the amount of fat in the recipe, I left out the butter and substituted non-fat Greek yogurt for the creme fraiche.

I learned that Greek yogurt can be used in sauce recipes, but it should be added at the end of the cooking process. Since heating the yogurt can cause curdling, I made sure to remove the pan from the stove before whisking in the yogurt. What resulted was a pleasingly mellow, slightly tart sauce. My family enjoyed this chicken dish with Quinoa Pilaf and Swiss Chard with Garlic and Olive Oil. 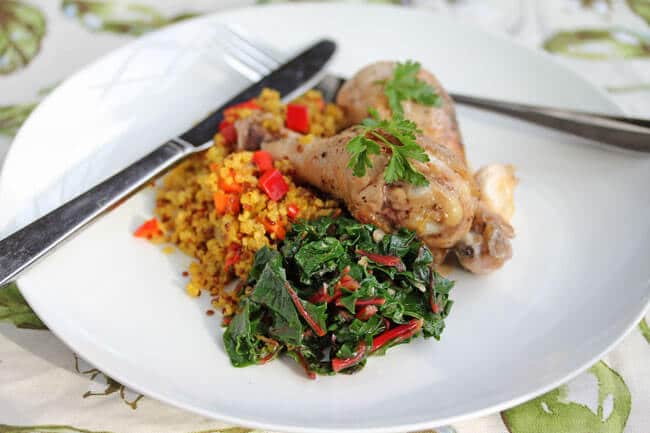 Side dishes – Swiss Chard with Garlic and Olive Oil, and Quinoa Pilaf

Today, a group of bloggers is celebrating April Bloomfield, one of the Top 50 Women Game Changers In Food. The chicken dish I made is based off of April Bloomfield’s recipe as was the swiss chard I served alongside it. This weekly event of cooking our way through the Top Women Game Changers In Food has been fun as well as educational. Once again, I did not know this week’s Woman Game Changer. Although I had heard of her Spotted Pig restaurant, I did not know that April was the co-owner/executive chef.

April Bloomfield was born in Birmingham, England, but is now  U.S. citizen. She describes her style of cooking as “British, but with Italian undertones,” attributing her Mediterranean influence to the four years she spent cooking at the River Cafe in London. It was there that she tasted a simple bowl of tagliatelle tossed with walnut pesto and realized “how deeply delicious simple food could taste.” In an interview with Food and Wine, Bloomfield is said to favor “simplicity over showmanship and likes to construct dishes around as few ingredients as possible.”

April Bloomfield has two Michelin stars: one for The Spotted Pig, a gastropub, and the other for the Breslin, both in New York City. She also owns the John Dory Oyster Bar in Manhattan with her business partner, Ken Friedman. Jaimie Oliver introduced her to Mario Batali in 2003, who was so impressed with her, that he and Joseph Bastianich became investors in The Spotted Pig.

The recipe I am sharing today is April Bloomfield’s take on a classic French dish that she tasted during a trip to Lyon, France. Prior to visiting France, April was not a fan of French food, having the preconception that France was a bit “hoity-toity.” However, during her trip, she discovered that some French food was “super-rustic, so simple and perfect.”

April has taken this classic French dish and made it tangier by adding more vinegar and finishing the chicken in the sauce for more flavor. I have simply made April’s recipe a bit  healthier by reducing the amount of fat.

Adapted from April Bloomfield. I made this dish lighter by leaving out the butter and substituting non-fat Greek yogurt for creme fraiche. If you want to make this dairy-free, simply leave out the yogurt; however, I think it mellows out the acidity in the sauce and adds a deceptively rich and creamy mouthfeel.
Prep Time 5 minutes
Cook Time 40 minutes
Total Time 45 minutes
Servings 4 -6

I served this chicken dish with Quinoa Pilaf and Swiss Chard with Garlic and Olive Oil.