This Strawberry Banana French Toast Casserole is the perfect breakfast or brunch recipe that will brighten up any day. 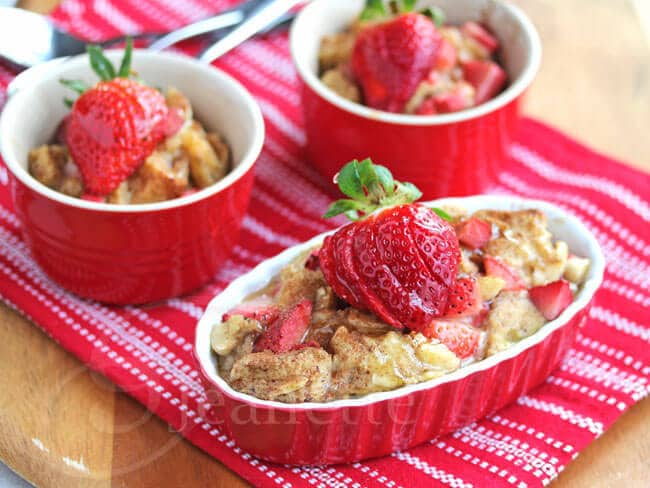 I’ve been keeping a secret the past few weeks. You see, I made this Strawberry Banana French Toast Casserole for my son who had his wisdom teeth pulled three weeks ago and wanted to share it with all of you, but I wasn’t allowed to until today. Today is “reveal day” for Group B of the Secret Recipe Club, created by Amanda of Amanda’s Cookin, and hosted by Suzanne of Thru the Bugs on My Windshield.

After my son had four of his wisdom teeth removed, I was faced with the challenge of coming up with soft foods that he could eat and enjoy. After the first day, he had already declared he would not eat another cup of yogurt or pudding. So, the next six days I spent a lot of time creating and cooking soft foods that tasted good and looked good. A few moms told me they just gave their kids pudding and jello, and I thought my son would be perfectly happy having an excuse to just eat sweets for a week. But, I was totally wrong. He told me he wanted “real” food.

Fortunately, I came across this recipe for Strawberry Banana French Toast Casserole on Successful Together. It sounded like the perfect recipe for my son…a soft delicious breakfast that included whole grains, fruit and protein. I made half the recipe using white whole grain bread (for my son who had his wisdom teeth removed), and the other half using gluten-free bread for my youngest who is allergic to wheat. Made in individual ramekins, this french toast casserole was a hit with both of my boys. 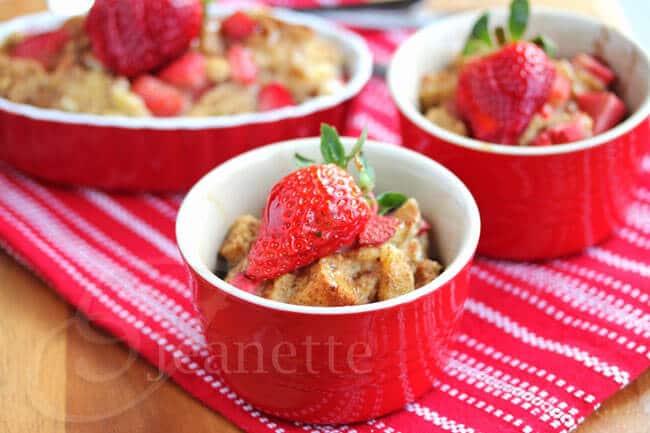 So far, everything I’ve tried for the Secret Recipe Club has come out really well, and I’ve had the opportunity to delve deeper into some blogs more intimately and get to know the person behind the blog. This club has grown so rapidly that Amanda has created four different groups that have a different reveal day during each month. The idea behind the Secret Recipe Club is to give bloggers the chance to try each other’s recipes without the other bloggers knowing it until everyone posts their results.

This month I was assigned to Angie, the blogger behind Successful Together. So, who is Angie? Angie lives in Anderson, SC with her loving Hubby and their three Furbabies. She loves to save money with coupons, and helps keep her life on track with Weight Watchers. Angie became a lifetime member of Weight Watchers in September of 2008 and has been able to keep off the 40 pounds she lost. Congratulations Angie!

From looking through Angie’s recipe index, you will notice that she loves pancakes, oatmeal and french toast. She also loves strawberries, bananas, and the combination of chocolate and peanut butter.  In fact, it took me a while to figure out which of Angie’s recipes to try. Her Banana Cinnamon French Toast with Strawberry Sauce, Chocolate Cherry Oatmeal, and French Toast Oatmeal Pancakes all sounded fantastic. For anyone who uses the Weight Watcher’s point system, Angie provides Weight Watcher points for all her recipes.

Just yesterday, I was reaching out to my Facebook fans for help pulling together some healthy recipes for our local food pantry. Angie happened to answer back – what a coincidence! I am featuring her Banana Cinnamon French Toast Casserole on one of the recipe cards. I am hoping to put together new recipe cards for our local food pantry every 2 weeks, so if any of you have easy healthy recipe ideas using pantry ingredients, please provide links or recipes in the comments section. Thanks! 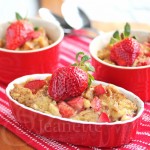 Adapted from Success Together to be dairy-free and gluten-free if needed. Because one of my sons is gluten-free, I made half the recipe using white whole wheat bread and the other half using gluten-free bread, then baked each in separate ramekins.
Prep Time 10 minutes
Cook Time 25 minutes
Total Time 35 minutes
Servings 3
Calories 218 kcal