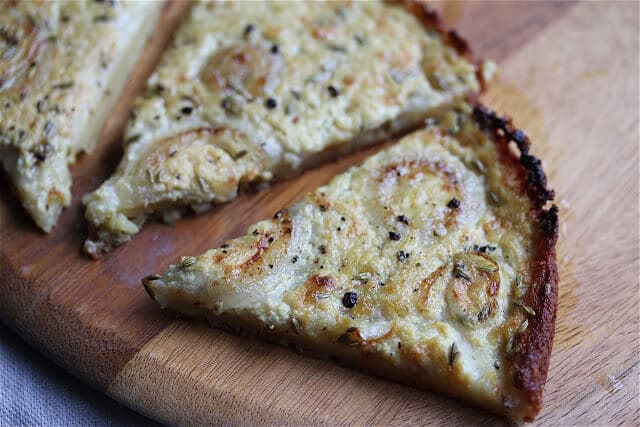 Ever since my youngest son was found to be allergic to wheat among other foods, I find myself constantly looking for gluten-free recipes that might remind him of something tasty he used to enjoy. Call it comfort food. One of the recipes I’ve been wanting to try for a while is Socca, Farinata, or as I call it Chickpea Pizza (although there’s no cheese or tomato sauce involved). This Chickpea Pizza goes by many names. In Nice, it is called “Socca,” in Tuscany “Cecina,” and in Argentina “Faina.” Whether you want to call it Farinata, Socca or Faina, this dish is made simply from chickpea flour, water and olive oil.

So, this week, when I found a simple recipe in Is There Nutmeg In The Houseby Elizabeth David, I knew I had to try it. Elizabeth David is being honored by a group of bloggers as one of 50 Women Game-Changers in food recently recognized by Gourmet Live. Mary from One Perfect Bite came up with this brilliant idea, so if you’re interested in joining in on the fun, just ask Mary. We’ve been cooking our way through this list of 50 influential women in food, selecting a recipe from each of them to try each week.
According to Gourmet Live, “David’s French Country Cooking predated Julia Child’s Mastering the Art of French Cooking by a decade. The terribly influential British writer didn’t so much teach a nation to cook French as inspire one to think Mediterranean.” I have to admit that I had never heard of Elizabeth David before, but I enjoyed perusing through Is There Nutmeg In The House, a collection of her work over a period of four decades, published after her death in 1992.In fact, Elizabeth David published eight books during her lifetime, including Book of Mediterranean Food (1950), English Bread and Yeast Cookery (1977), and Omelette and a Glass of Wine (1984).

Although traditionally Farinata is made with just chick pea flour, water and olive oil, Elizabeth David points out that the Farinata of Oneglia is “strewn with very finely sliced onions before it is consigned to the oven, and at Savona it is sprinkled with rosemary leaves.” She discusses the thickness of Farinata, saying that if it is more than 1 1/4″ thick, it becomes “stodgy.” Her own variation includes adding some fennel seeds. 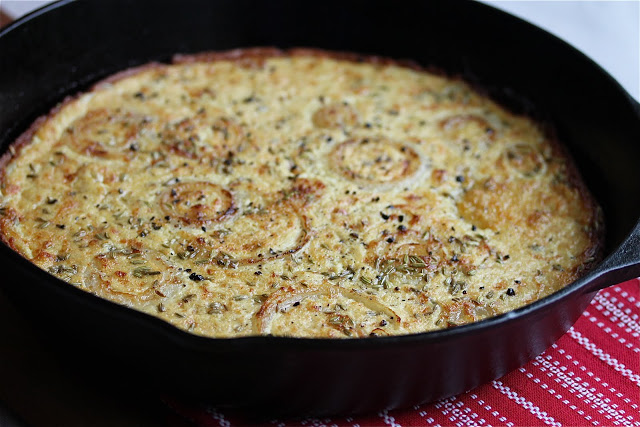 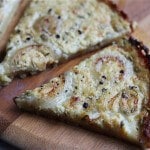 Adapted from Is There Nutmeg In The House. The original recipe calls for the Farinata batter to be baked in a shallow earthenware dish - I chose to use a cast iron pan. I found this recipe a bit salty, so I have halved the amount of salt in this recipe. I followed Elizabeth David's suggestions of adding thinly sliced onions and some fennel seeds to the Farinata batter. This recipe produced a fragrant and savory treat, crusty on the bottom and sides, with a chewy interior and creamy top.