Easy Caramelized Baked Chicken with Green Olives and Prunes is a delicious healthy meal that gets its amazing flavor from marinating the chicken. 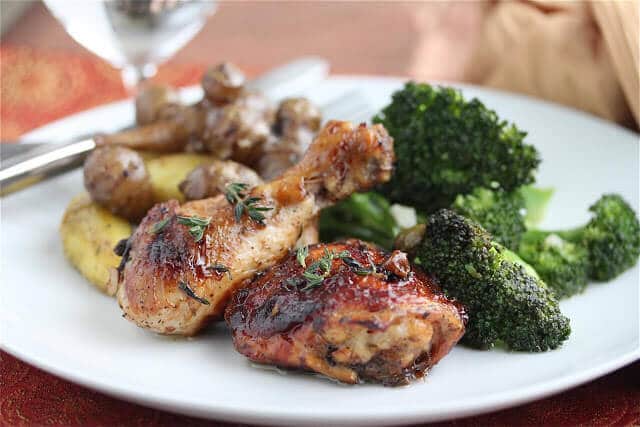 I make a lot of chicken during the week for my kids. Every night, they ask “what’s for dinner?” and on many days, the answer is simply …”chicken.” Of course, that begs the next question, “But what kind, Mom?” Fortunately, there are so many easy ways to cook chicken, that rarely do they complain once they sit down at the dinner table. Sometimes I stir fry chicken with vegetables, other times I poach it, and often, I bake chicken – there’s less fuss and cleanup involved.

This week, I made Caramelized Baked Chicken with Green Olives and Prunes, a dish that is best left to marinade the night before, then thrown into the oven the next day. It’s delicious at room temperature, which makes it perfect for busy weeknight dinners.

This recipe is from Clotilde Dusoulier’s Chocolate & Zucchini blog, and is based off of the infamous Silver Palate Chicken Marbella recipe. Clotilde calls this dish Birthday Chicken because she made this for a group of lucky friends who gathered to celebrate her birthday one year. A few modifications to the original Chicken Marbella recipe were made, including using sherry vinegar, and sprinkling on some fresh cilantro and toasted sliced almonds before serving.

This week, a group of bloggers is celebrating Clotilde Dusoulier as one of the 50 Women Game Changers in Food. According to Gourmet Live, “Clotilde Dusoulier’s 2003-vintage blog, Chocolate & Zucchini is the Francophile’s dream.” When I first came across Chocolate & Zucchini, I thought the name was a bit odd, but soon discovered that this name encompasses Clotilde’s cooking style – the zucchini illustrates her focus on healthy and natural eating, while the chocolate represents her love for baking and chocolate.

Although Clotilde is 100% French, she started publishing Chocolate & Zucchini in English as a way to stay fluent in English following a two-year stint as a software engineer in California (she’s obviously super smart!). Also, when she first started her blog, the handful of blogs that existed were in English and she liked the sense of community between bloggers. Four years ago, Clotilde started publishing a French version of Chocolate & Zucchini as well.

Since Zucchini & Chocolate has been in existence since 2003, there are tons of recipes on Clotilde’s blog, so many that I had a tough time deciding what to make. One one night several weeks ago, I made her Saffron Roasted Cauliflower, and this week, her Perfect Roast Potatoes and this Caramelized Baked Chicken with Green Olives and Prunes. I had picked up some Jerusalem Artichokes from the farmer’s market this past weekend and threw them in with the roast potatoes – I’d never tried them before – they’re starchy like potatoes. Served with some roasted broccoli, I had a complete meal on the table, all made in the oven. 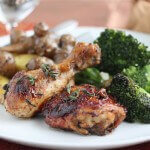 Adapted from Chocolate and Zucchini. I halved her recipe which was plenty for our family. ClotiIde uses coriander and almonds, but I didn't have any, so I threw in some fresh thyme in the marinade. In the rush of things, I added the wine and sugar to the marinade instead of sprinkling the chicken with sugar and adding the wine just prior to baking - I think it came out just as good. I also adjusted the baking time downward to 40 minutes as the chicken was fully cooked and brown by then in my oven. Feel free to use chicken breast on the bone - my kids just prefer dark meat which is what I used.