Those of you who have been following my blog know that I love trying new cuisines. In fact, I love the challenge of learning about the ingredients, spices and cooking techniques unique to different cultures. Over the past two years, my blog has become a place to chronicle my journey experimenting with recipes and exploring cuisines that I’ve never tried before.

Recently, I was asked to participate in a virtual Mid-East Feast to celebrate the upcoming release of An Edible Mosaic, authored and photographed by my fellow blogging friend, Faith Gorsky. Brandy from Nutmeg Nanny is organizing this month-long event where a group of fabulous foodie bloggers will be sharing a different recipe for the next three weeks – an appetizer this week, a main course next week, and a dessert the following week. The fourth week will culminate in a review and giveaway of a copy of An Edible Mosaic. 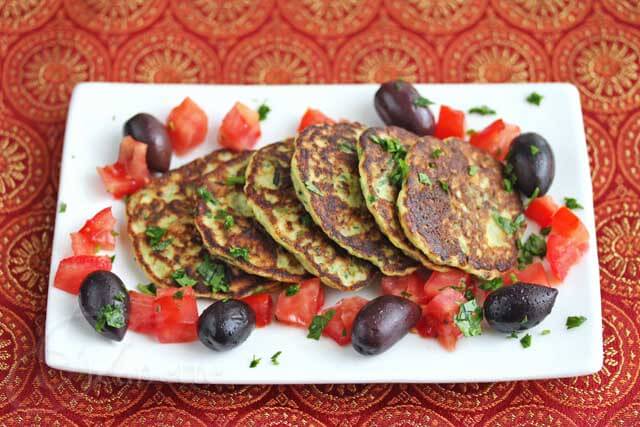 This past week, I made Faith’s Zucchini Fritters (using a gluten-free flour mix recipe my friend recommended), which are often served as an appetizer, for breakfast, or as part of a Maza Platter. Maza Platters are often eaten at breakfast and dinner (which are the smaller meals of the day), and may also be served before lunch (the largest meal of the day) or as a snack. Think about a Maza Platter as a large platter filled with small plates and bowls of appetizers (like tapas). In addition to dips and spreads, you might find cut up tomatoes, cucumbers, lettuce leaves, celery sticks, olives, leftover vegetable dishes, olive oil and Za’atar spice mix. In the Middle East, food served in this style are eaten with your hands or with flatbread. 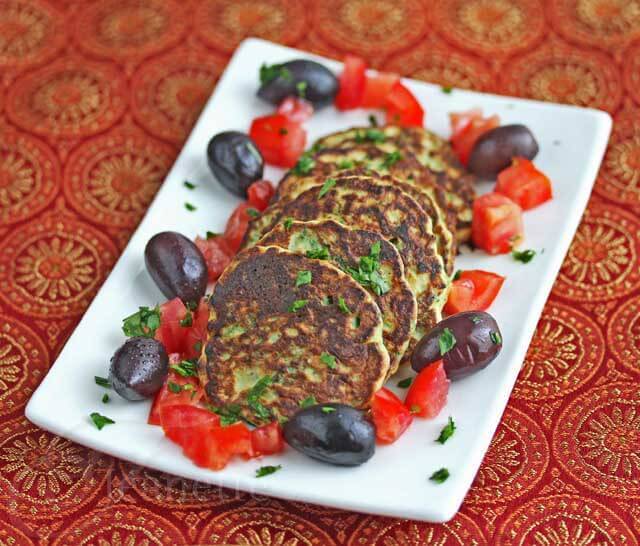 These Zucchini Fritters are actually more like savory pancake, flavored with onion and garlic. The texture is almost a cross between an omelette and a pancake.  I made these the other day just as one of my kids was walking in the door after school. He asked what I was making and when I told him “Zucchini Fritters,” he immediately responded, “You shouldn’t have told me there was zucchini in those, because now I won’t like them.” Well, let’s just say that after he tried one, he had another and then another. I actually had to hide a stash to save for my husband and one of my other kids. Although these savory pancakes can be eaten at room temperature, I prefer them warm.

I am currently obsessed with trying the recipes in An Edible Mosaic. Over the next several weeks, I’ll be sharing two more recipes from Faith’s upcoming cookbook, although I can tell you that I will be making many other recipes. This past weekend, I assembled my first Maza Platter for a church picnic and included Faith’s suggestions – Eggplant Dip (Mutabbal Batinjan), Bell Pepper Walnut Dip (Muhammara), Yogurt Cheese (Labneh) and Colorful Cabbage Salad with Lemony Mint Salad Dressing (Salatit Malfoof). I was hoping to include Beet Salad with Tahini Dressing, which I made the other night (so simple to make and incredibly good), but ran out of time. The Maza Platter was a hit, with the Bell Pepper Walnut Dip and Eggplant Dip coming out on top as the favorites.

Give these Zucchini Fritters a try – you won’t be disappointed. For my next Maza Platter, I will be including a batch of these.

An Edible Mosaic is due out November 6, but you can pre-order it now.

Here are the eight other fabulous bloggers participating in the Mid-East Feast. Please pop by and see how their Zucchini Fritters turned out this week.

These are really like savory pancakes to be enjoyed hot, warm or room temperature.
Prep Time 10 minutes
Cook Time 20 minutes
Total Time 30 minutes
Servings 4 as part of a maza platter or appetizer

Used with permission from An Edible Mosaic by Faith E. Gorsky