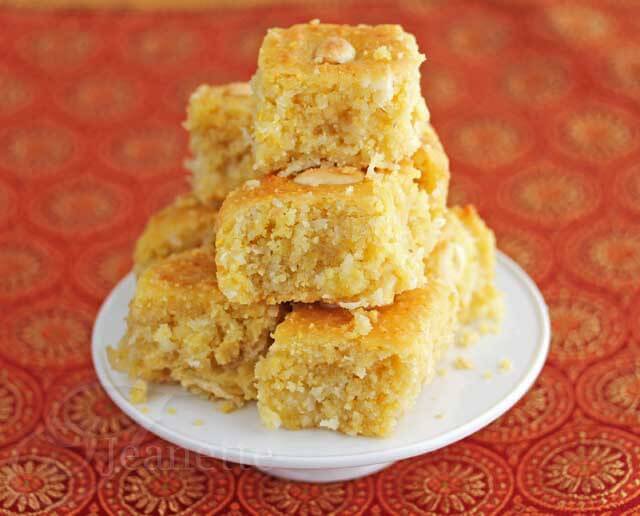 Recently, I was asked to participate in a virtual Mid-East Feast to celebrate the upcoming release of An Edible Mosaic, authored and photographed by my fellow blogging friend, Faith Gorsky. Brandy from Nutmeg Nanny is organizing this month-long event where a group of fabulous foodie bloggers has been sharing a different recipe for the past three weeks. So far, we’ve made Zucchini Fritters and  Spiced Chicken Shawarma Wraps.

This week, we all made a Middle Eastern dessert – Semolina Cake.

I actually made my first Semolina Cake from An Edible Mosaic a few weeks ago. A good friend of mine made one for a birthday celebration last year, and I remember asking for the recipe, but alas, I never made it. Now that one of my kids is gluten-free, I can’t serve Semolina Cake to our family, so I wanted to try a version using some sort of gluten-free flour.

Since I had never made a Semolina Cake before, I decided it was best if I first made Faith’s recipe using semolina flour so I could get a sense for what the texture of the cake should be. Our local Greek market had semolina flour so it was easy enough to find. Semolina cake has a coarser texture and is denser than most cakes. Faith’s recipe calls for a sugar syrup which keeps the cake moist and goes nicely with the dryer cake. 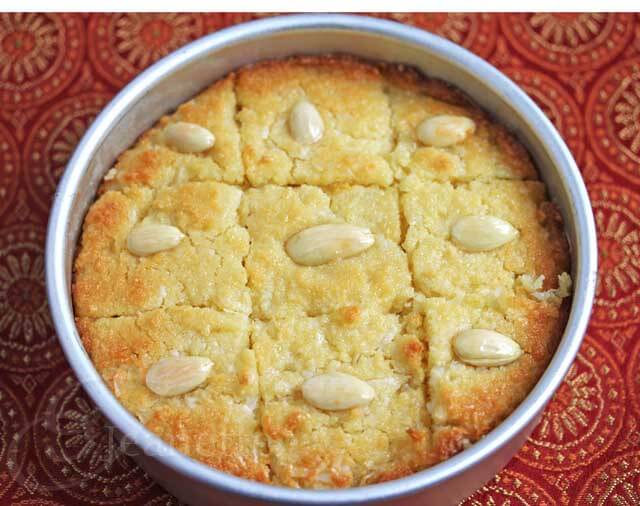 As I pondered what flour to try substituting for semolina flour, I remembered that I had made cornbread last year using corn flour. In fact, I had read an article that corn flour was the secret to Southern cakes. It has a unique texture that is coarser than regular flour. I actually mixed some cornmeal in with the corn flour to give the cake even more texture, although I think I would make it with 100% corn flour next time. The cornmeal added a little crunch which is great in cornbread, but might be unexpected in a cake.

The first time I made this Semolina Cake, I used Faith’s sugar syrup recipe, choosing to use just half of what was called for in the recipe as our family doesn’t eat super sweet desserts. I served this to a good friend of mine when she was over for lunch one day and she loved it. So, I sent her off with the extras since I knew I was going to have to make a gluten-free version.

The second time I made this cake, in addition to substituting corn flour for semolina flour, I chose to use honey in place of sugar in the sugar syrup. I also substituted coconut oil for the butter and almond milk for dairy milk. I have to say that, while this may not be the original Semolina Cake, it was really good. I actually preferred the honey syrup to the sugar syrup. Scented with rose water, it was a fragrant way to keep the cake nice and moist. 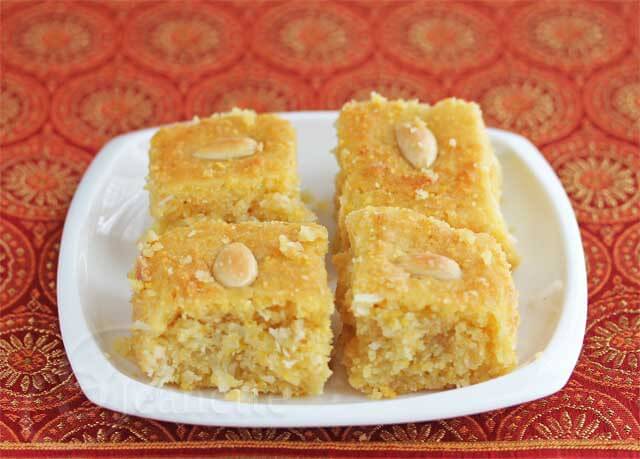 Here are the eight other fabulous bloggers participating in the Mid-East Feast. Please pop by and see how their Semolina Cake turned out this week.

I actually made half this recipe in a small round pan, which was plenty for our family. This is a sweet dense cake, perfect in small quantities and served with a cup of tea.
Prep Time 20 minutes
Cook Time 35 minutes
Total Time 55 minutes
Servings 10 -12